The Milford Land Conservation Trust, Inc., was formed in January, 1971, when it was sponsored by the Milford League of Women, and was incorporated in May, 1971. Longtime resident Fran Crowley was a founder and served as its first President. Many prominent Milford families served as officers and Board members, and made land donations during the early years. 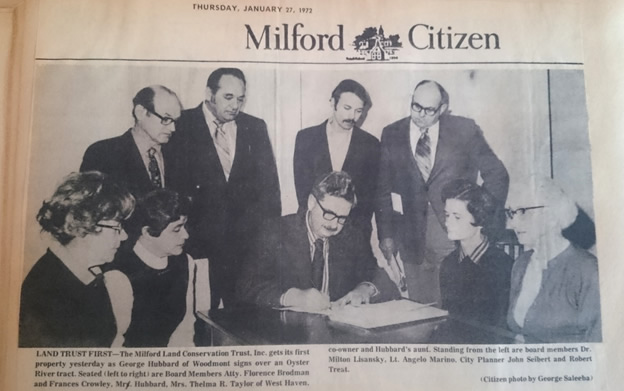 The Oyster River site on Anderson Ave, the first piece of a 1.3-acre tract, was donated by George Hubbard of Woodmont, his sister Thelma Taylor of West Haven, and his aunt, Christin Hubbard Pickett, who attended the transferal ceremonies in January, 1972.

Through its efforts, MLCT has been able to preserve important parcels of land that not only provide glimpses into Milford history, but also preserve natural spaces for future generations to enjoy.

The mission of the Milford Land Conservation Trust is the preservation and conservation of the natural resources of open space land in the City of Milford, CT.